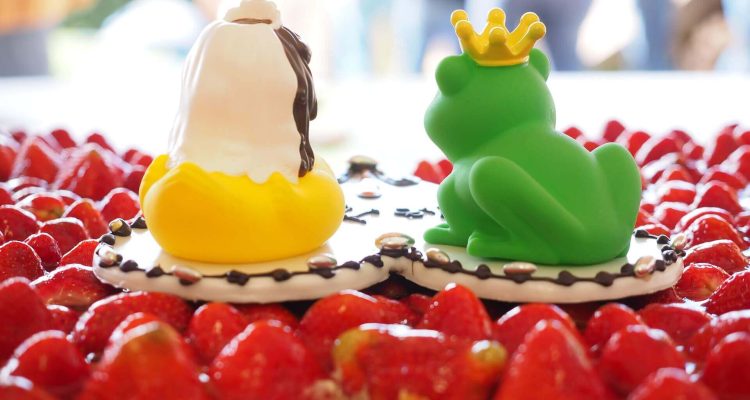 The first evidence of baking occurred when humans took wild grass grains, soaked them in water, and mixed everything together, mashing it into a kind of broth-like paste.The paste was cooked by pouring it onto a flat, hot rock, resulting in a bread-like substance. Later, when humans mastered fire, the paste was roasted on hot embers, which made bread-making easier, as it could now be made any time fire was created. The world’s oldest oven was discovered in Croatia in 2014 dating back 6500 years ago. The Ancient Egyptians baked bread using yeast, which they had previously been using to brew beer.Bread baking began in Ancient Greece around 600 BC, leading to the invention of enclosed ovens. “Ovens and worktables have been discovered in archaeological digs from Turkey (Hacilar) to Palestine (Jericho) and date back to 5600 BC.”

Baking flourished during the Roman Empire. Beginning around 300 BC, the pastry cook became an occupation for Romans (known as the pastillarium) and became a respected profession because pastries were considered decadent, and Romans loved festivity and celebration. Thus, pastries were often cooked especially for large banquets, and any pastry cook who could invent new types of tasty treats was highly prized. Around 1 AD, there were more than three hundred pastry chefs in Rome, and Cato wrote about how they created all sorts of diverse foods and flourished professionally and socially because of their creations. Cato speaks of an enormous number of breads including; libum (sacrificial cakes made with flour), placenta (groats and cress), spira (our modern day flour pretzels), scibilata (tortes), savaillum (sweet cake), and globus apherica (fritters). A great selection of these, with many different variations, different ingredients, and varied patterns, were often found at banquets and dining halls. The Romans baked bread in an oven with its own chimney, and had mills to grind grain into flour. A bakers’ guild was established in 168 BC in Rome.

Eventually, the Roman art of baking became known throughout Europe and eventually spread to eastern parts of Asia. By the 13th century in London, commercial trading, including baking, had many regulations attached. In the case of food, they were designed to create a system “so there was little possibility of false measures, adulterated food or shoddy manufactures.” There were by that time twenty regulations applying to bakers alone, including that every baker had to have “the impression of his seal” upon each loaf of bread.

Beginning in the 19th century, alternative leavening agents became more common, such as baking soda. Bakers often baked goods at home and then sold them in the streets. This scene was so common that Rembrandt, among others, painted a pastry chef selling pancakes in the streets of Germany, with children clamoring for a sample. In London, pastry chefs sold their goods from handcarts. This developed into a delivery system of baked goods to households and greatly increased demand as a result. In Paris, the first open-air café of baked goods was developed, and baking became an established art throughout the entire world.

Baking eventually developed into a commercial industry using automated machinery which enabled more goods to be produced for widespread distribution. In the United States, the baking industry “was built on marketing methods used during feudal times and production techniques developed by the Romans.”Some makers of snacks such as potato chips or crisps have produced baked versions of their snack products as an alternative to the usual cooking method of deep-frying in an attempt to reduce their calorie or fat content. Baking has opened up doors to businesses such as cake shops and factories where the baking process is done with larger amounts in large, open furnaces.

The aroma and texture of baked goods as they come out of the oven are strongly appealing but is a quality that is quickly lost. Since the flavour and appeal largely depend on freshness, commercial producers have to compensate by using food additives as well as imaginative labeling. As more and more baked goods are purchased from commercial suppliers, producers try to capture that original appeal by adding the label “home-baked.” Such attempts seek to make an emotional link to the remembered freshness of baked goods as well as to attach positive associations the purchaser has with the idea of “home” to the bought product. Freshness is such an important quality that restaurants, although they are commercial (and not domestic) preparers of food, bake their own products. For example, scones at The Ritz London Hotel “are not baked until early afternoon on the day they are to be served, to make sure they are as fresh as possible.”